Heroes of the Storm Wiki
Register
Don't have an account?
Sign In
Advertisement
in: Warcraft, Human, Heroes,
and 4 more

Whitemane is a Ranged Support Hero from the Warcraft universe.

As the High Inquisitor of the Scarlet Crusade, Sally Whitemane zealously leads her champions in a never-ending war against the undead. Under her guiding Light, all who have been touched by the plague of death will be purged by her cleansing flame... No matter how much they protest.

Whitemane is a versatile Healer who heals her allies by smiting her foes.

The Monastery was once a proud bastion of Lordaeron's priesthood - a center for learning and enlightenment. However, with the rise of the undead Scourge during the Third War, the peaceful Monastery was converted into a stronghold of the fanatical Scarlet Crusade. Under Whitemane's command, the members of the Scarlet Crusade have become ever more extreme in their battle against the Scourge. Their grasp on reality was slipping and as time moved on, Whitemane and her followers no longer trusted anyone that was not part of their own Scarlet Crusade, considering them plagued. Large numbers of innocent men and women were tortured and eventually killed because of this.

It is known that both Raleigh the Devout in the Hillsbrad Foothills and Varimathras in the Undercity are determined to eliminate the leadership of the Scarlet Monastery, albeit for different reasons. The dreadlord of the Forsaken wishes to end the continued threat of the Scarlet Crusade so close to his capital and the human in Southshore believes the only way the Scarlet Crusade can be brought back to its original purpose is to remove the corrupted leaders.

Whitemane has an active, combat-heavy playstyle similar to that of Kharazim due to the nature of her trait, Zeal. She is required to be closer to the frontline than most supports and actively dealing damage in order to maximize her effectiveness. Desperate Plea is the only basic ability that costs mana, so the typical strategy is to apply Zeal to your team and use Inquisition and Searing Lash off-cooldown to heal. Because of Desperate Plea's stacking mana cost, she tends to run out of mana quickly in prolonged teamfights if High Inquisitor isn't picked at level 4, but doing so is a big power-spike that allows her to use Desperate Plea much more zealously; turning it into a reliable healing ability that doesn't need to focus as much on Zeal for healing.

Generally, she is best played when teamed with a decent frontline that can peel for her if the situation gets sticky, as she has no escapes or knockbacks herself. She has sub-par healing numbers early in the match and sometimes struggles to keep up if a big teamfight breaks out before level 10, but after level 10 she becomes an extremely potent group healer capable of turning the tide of a losing teamfight.

Heal an allied Hero for 145 and gain Desperation for 4 seconds.

Desperation increases Desperate Plea's Mana cost by 60, and stacks up to 3 times.

Channel on an enemy Hero for up to 3 seconds, dealing 53 damage every 0.5 seconds and Slowing them by 30%.

After 0.5 seconds, smite enemies in a straight line for 82 damage.

If the first strike hits an enemy Hero, a second strike will occur after a short delay.

Allies with Zeal are healed for 100% of the damage Whitemane deals to Heroes.

Bolster the spirits of nearby allied Heroes, healing them for 250 and granting them 40 Armor for 4 seconds.

After 1 second, consecrate an area for 4 seconds, dealing 50 damage every 0.5 seconds to enemies inside.

Each stack of Desperation increases Desperate Plea's healing by 30%.

Activate to cast Inquisition on an allied Hero, healing them for up to 371 over 3 seconds while Channeling.

Upon reaching 3 stacks of Desperation, gain a 250 Shield for 5 seconds.

Activate to gain 50% Spell Power and lose 25 Armor for 5 seconds.

Activate to make an ally Unstoppable for 1 second and gain 1 stack of Desperation.

Bolster the spirits of nearby allied Heroes, healing them for 250 and granting them 40 Armor for 4 seconds.

After 1 second, consecrate an area for 4 seconds, dealing 50 damage every 0.5 seconds to enemies inside.

Casting Desperate Plea on an ally heals Whitemane for 125 (+4% per level). Does not grant Zeal.

Hitting a Hero with Searing Lash while they are being targeted by Inquisition Roots them for 1.5 seconds.

Whenever Zeal is applied to allies other than Whitemane, it grants them 20% Movement Speed for 2 seconds.

Upon reaching 3 stacks of Desperation, all allies with Zeal are healed for 200.

Upon casting, Inquisition can chain to an additional enemy Hero near its target, dealing 35 damage every 0.5 seconds.

Divine Reckoning deals 50% more damage and pulls enemies to its center the first time it hits them.

Inquisition reduces all damage the target deals by 75%.

Activate to blast an enemy Hero with holy fire, reducing their Armor by 25 and dealing 300 damage over 4 seconds. 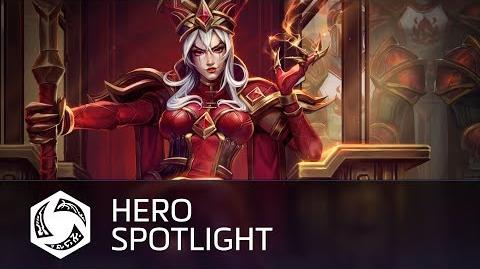