Heroes of the Storm Wiki
Register
Don't have an account?
Sign In
Advertisement
in: StarCraft, Assassin, Heroes,
and 4 more

Tychus is a Ranged Assassin Hero from the StarCraft universe.

Tychus Findlay is a big man with a big ego and even bigger gun. Fortunately enough, his loyalty is easily won. Buy him a whiskey or three and promise him enough credits, and there's no job in the whole universe too dangerous for this outlaw.

Former soldier. Erstwhile thief. Convicted felon. Tychus Findlay and Jim Raynor share what some might call a checkered past—the type filled with daring exploits and courageous fights doing not so courageous deeds. While no one can be sure where Tychus' loyalties lie, one thing is for certain. He's a fearsome combatant whose impact on the battlefield is anything but subtle. Tychus always goes big. Always.

Lob a grenade that deals 267 (+4% per level) damage, knocking enemies away.

Activate to cause Basic Attacks against Heroes to deal bonus damage equal to 2.5% of the target’s maximum Health. Lasts 3 seconds.

Call down an Odin to pilot. The Odin deals increased Damage, has 60% increased Basic Attack range, and uses different Abilities. The Odin has 25 Armor and lasts 23 seconds.

Call down a Laser Drill to attack nearby enemies, dealing 148 (+4% per level) damage every second. Reactivate to assign a new target. Lasts 22 seconds.

Fire the Odin's cannons in a straight line, dealing 204 (+4% per level) damage to everything in the path.

Launches a volley of missiles at target area, dealing 138 (+4% per level) damage and slowing enemy Movement Speed by 30% for 2 seconds.

Run and Gun increases Basic Attack range by 1.5 for 3 seconds.

Gather Regeneration Globes to increase Movement Speed after casting Run and Gun by 1% for 2 seconds, up to a maximum of 25%. After reaching 25 stacks, Run and Gun’s range is increased by 50%.

Each Basic Attack reduces Run and Gun’s cooldown by 0.80 seconds.

Hero takedowns increase Attack Speed by 1%, up to a maximum of 15%. While at maximum stacks, Tychus gains an additional 10% Attack Speed bonus.

While Minigun is active, each Basic Attack against an enemy Hero permanently increases its duration by 0.03 seconds.

Lowers the cooldown of Minigun by 2 seconds and increase the damage bonus to 4% while enemy Heroes are above 35% Health, but Minigun no longer has any effect on targets below 35%.

Increases the range of Frag Grenade by 50%.

Being Stunned or Rooted grants 25 Armor for 3 seconds, reducing damage taken by 25%.

Call down an Odin to pilot. The Odin deals increased Damage, has 60% increased Basic Attack range, and uses different Abilities. The Odin has 25 Armor and lasts 23 seconds.

Call down a Laser Drill to attack nearby enemies, dealing 148 (+4% per level) damage every second. Reactivate to assign a new target. Lasts 22 seconds.

Minigun heals you for 100% of the bonus damage it deals to Heroes.

Overkill's damage to the primary target increased by 50%.

Overkill applies a stacking slow, up to 20%.

Frag Grenade deals bonus damage to Heroes equal to 5% of their maximum Health.

Increases the range of the Drakken Laser Drill by 50%. Deals increased damage the longer it remains on a single target, up to 100% extra damage.

Basic Attacks deal 1% of the target’s maximum Health as damage.

Run and Gun and Odin's Thrusters gain 2 additional charges and reduces Run and Gun's Mana cost from 50 to 25.

100
They say no one has ever escaped from New Folsom Prison. Wasn't too long ago they were still right.

100
Sure, that suit may be his prison... But you and I both know that's not going to stop him from sprucing the thing up... Now, is it?

600
Hell, it's about summertime.
This skin is related to the Sun's Out, Guns Out themed-skins. Features replaced voice-over, themed abilities and themed animations.

600
Welcome to the gun show.
This skin is related to the Sun's Out, Guns Out themed-skins. Features replaced voice-over, themed abilities and themed animations.

Tychus originally had a trait where when he would melee an enemy, and then stun them. Combined with a shoulder charge attack that could be targeted on an enemy, the same ability would give Tychus a shield if he targeted a minion. So a player had to choose between targeting a hero and stunning them or a minion to get shield. The designers thought this created an interesting choice for gameplay purposes, but the kit didn't work out. The gameplay was too complicated and didn’t make sense for a ranged assassin who had a massive chain gun that was most of his profile. So, his skillset was re-designd around the mini-gun into its current form.[1]

Tychus's model originally had a cigar. This was removed at some point during development.[4] This was because while Heroes of the Storm has a teen rating, the presence of a cigar would shift it into higher ratings in some regions. To keep the rating, the developers would have to make two versions of the character as per the different regions. As such, the cigar was removed to standardize the model.[5] 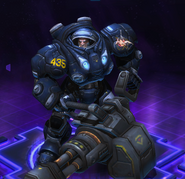 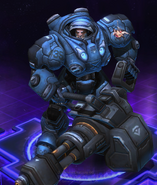 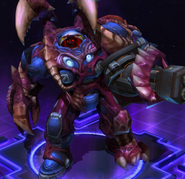 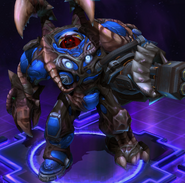 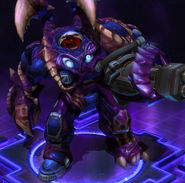