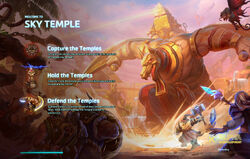 Sky Temple is an Egyptian-themed battleground.[1] Floating above the vast desert sands of Luxoria, the Sky Temple serves as a center of worship for the snake god, Ka. He stores his great power within the temples, each of them secured by guardians. With such defenses, no warriors would think to seize the god's power for themselves... or would they?[2]

Sky Temple is a large map, where most of the core objectives lie outside the lanes. Teams must periodically fight to capture the ancient temples, defeat their guardians, and use their power to destroy the enemy’s fortifications.[3]

The first temple will activate 3 minutes into the match, following a 30-second warning. The first Temple indicators will appear on the Minimap 30 seconds after the game begins, as well as 30 seconds after all Temples in the same event have been depleted.

On this particular map the Boss is in the middle of the map that is called the "Mosh Pit". This object is dangerous to take because both teams can easily disrupt the other teams attempt to capture the Boss. It is advisable to avoid attempting to take this objective unless your team has a sizable level advantage or in numbers (i.e., after a favorable team battle). 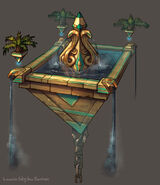 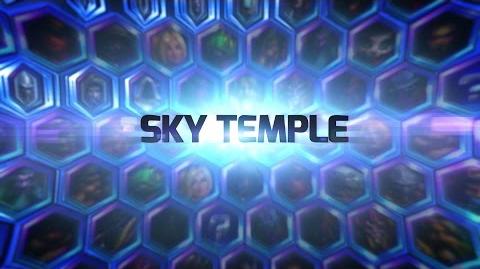