Heroes of the Storm Wiki
Register
Don't have an account?
Sign In
Advertisement
in: StarCraft, Heroes, Specialist, Human

Sgt. Hammer is a Ranged Specialist Hero from the StarCraft universe, though her first appearence was in Heroes of the Storm. She is based off the terran siege tank.

Sergeant Bama “the Hammer” Kowalski has served some of the toughest tours around the Koprulu sector. The thunderous roar of her siege tank’s shock cannon strikes fear right into the heart of the toughest of warriors...including some of her allies.

Create 3 mines that arm after 1.25 seconds. Mines detonate when an enemy comes in range, dealing 96 (+4% per level) damage to nearby enemies and Slowing them by 25% for 1.5 seconds.

Deal 141 (+4% per level) damage to enemies in front of Sgt. Hammer and knock them back.

Increase your Movement Speed by 60% for 4 seconds. Thrusters are always active while at the Altar.

Activate to enter Siege Mode. While in Siege Mode, Basic Attacks deal 20% more damage, have 100% increased range, and deal 25% of their damage as splash damage around the target.

Fire a missile across the battlefield, dealing 515 (+3% per level) damage to enemies in its path.

Gain Stealth when entering Siege Mode or after not taking or dealing damage for 3 seconds while in Siege Mode. Basic Attacks while Stealthed deal 100% more damage.

Increase Siege Mode's splash damage to 25.25% of Basic Attack damage, and increase its splash radius by 25%.

Activate to increase Basic Attack damage dealt by 35% for 5 seconds. Hitting Structures with Basic Attacks reduces the cooldown of Maelstrom Rounds by 5 seconds.

Stores up to 3 charges.

Create a wall of path blocking debris for 4 seconds.

Basic Attacks while in Siege Mode heal for 10% of the damage dealt.

You can move at 40% Movement Speed in Siege Mode.

While in Siege Mode, Basic Attack range is increased by 1.0 every 3 seconds, up to 3.0.

Fire a missile across the battlefield, dealing 515 (+3% per level) damage to enemies in its path.

Moving while Thrusters is active leaves a trail of up to 5 Spider Mines. Additionally, increase the Slow of Spider Mines by 15%.

While in Siege Mode, Concussive Blast's damage and knockback distance are increased by 75%.

While in Siege Mode, hitting Heroes with Basic Attacks reduces the cooldown of Thrusters by 5 seconds.

Neosteel Plating grants 5% maximum Health as a Shield for 2 seconds. If this Shield is destroyed, Basic Attack damage is increased by 50% for 5 seconds.

Attacking a Hero that is slowed, rooted, or stunned increases your Basic Attack damage by 30% for 3 seconds.

Napalm Strike's range is increased by 75% and its impact does 50% more damage.

Upon detonating, Spider Mines reduce the armor of enemy Heroes hit by 10 for 4 seconds.

Hitting enemy Heroes with Basic Attacks while in Siege Mode grants 5% Attack Speed for 5 seconds, up to 40%.

D.Va is great at disrupting enemy engages due to her knockback, her Self-Destruct, and Defense Matrix. With D.Va providing protection, Sgt. Hammer can continue to shell away at the enemy team.

Sgt. Hammer can outheal Lunara's poison with Regenerative Bio-Steel talent, and her range, damage and health pool are higher than Lunara's health, range and damage. This allows Sgt. Hammer to duel with Lunara at almost anytime.

With as many kills as she'd racked up on the battlegrounds of the Nexus, Sgt. Hammer deserved her promotion to Master Sergeant... even if she promoted herself.

400
The Iron Demolisher is the pride of the orcish war machine. Sgt. Grimina Doomhammer was given the honor of piloting it in recognition of her years of service in the Arathi Basin battlefield.
This skin is related to the Warcraft themed-skins. Features themed abilities.

400
The battle has raged across War World III for years. No one remembers who fired the first shot, but Sgt. Bama the Hammer is fully confident she'll be the one firing the last.
Features themed abilities. 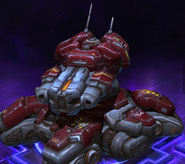 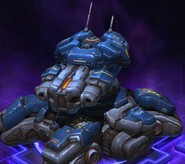 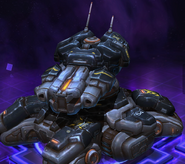 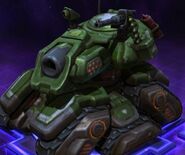 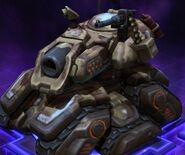 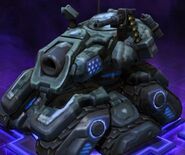