Heroes of the Storm Wiki
Register
Don't have an account?
Sign In
Advertisement
in: Warcraft, Warrior, Orc,
and 5 more

Rexxar
Champion of the Horde

Rexxar is a Ranged Warrior Hero from the Warcraft universe. Rexxar, the Champion of the Horde, is a half-ogre, half-orc beastmaster of the Mok’Nathal clan.

Out in the wild, there is only the law of the jungle; survival depends on having a pack, on looking out for one another. Together with his loyal animal companions, the bear Misha and Spirit the hawk, he prowls the Nexus, always looking for the next challenge. The strength of the bear, the hawk's swiftness, and the hunter's cunning make them a formidable (and inseparable) team.[1]

Rexxar is a Warrior with a mechanic akin to The Lost Vikings, as he is essentially two Heroes into one. He calls upon his bear companion Misha to follow him around the battlefield and attack his foes. Misha is integral to Rexxar’s gameplay, harassing enemies, absorbing damage, and stunning enemy characters.

Overall, Rexxar fits well in double Warrior compositions, as he has a solid laning power, can clear mercenary camps at ease, and is provided with a good blend of survivability, damage and utility.

Activate to command Misha to stay by your side.

Release a herd of boars that track down all enemy Heroes in a direction, dealing 114.4 (+4% per level) damage, revealing, and slowing enemies by 40% for 5 seconds.

Fire a flare at an area, revealing it for 20 seconds.

Misha's Basic Attacks heal her for 4.5% of her maximum Health.

Every 7 seconds, Rexxar and Misha gain 75 Physical Armor against the next enemy Hero Basic Attack, reducing the damage taken by 75%.

Stores up to 2 charges. Both Rexxar and Misha have their own charges.

Increases Spirit Swoop's slow amount to 50% and its duration to 3 seconds.

Increases Spirit Swoop's range by 20%. If Spirit Swoop hits an enemy Hero, the Mana cost is refunded and its cooldown is reduced by 2 seconds.

Release a herd of boars that track down all enemy Heroes in a direction, dealing 114.4 (+4% per level) damage, revealing, and slowing enemies by 40% for 5 seconds.

Rexxar and Misha's Basic Attacks increase the damage of the next Misha, Charge! by 40%, stacking up to a 400% bonus.

Your Basic Attacks increase both you and Misha's Movement Speed by for 25% for 2 seconds.

Enemies that Basic Attack you or Misha have their Attack Speed slowed by 40%.

Fake your death, becoming Invulnerable and untargetable for 5 seconds. During this time you control Misha.

Increases the duration of Bestial Wrath by 50%, and Misha's Basic Attacks heal Rexxar for 50% of the damage dealt.

Unleash the Boars deals 50% more damage and roots for 1.5 seconds.

You and Misha take 75% less damage for 4 seconds.

Players who choose to hunt by Rexxar’s side in the Nexus will find a Warrior like no other. Rexxar’s trait is Misha, his loyal bear companion who will fight with you and distract enemies while you throw your axes from safety. Use Spirit Swoop to slow all enemies in a line and set up a charge from Misha who will stun any enemy she hits. If your faithful friend gets low on health, Mend Pet will make sure she’s ready to get back into the action.

To make Misha more terrifying, choose Bestial Wrath as your Heroic to give her increased attack damage and make her a force to be reckoned with. If you prefer to play a more team oriented style, Unleash the Boars will create a horde of boars to hunt down enemy Heroes and slow them to bring the advantage to your allies.

Much like with the Lost Vikings, Rexxar and Misha can spread Healing Pathogen reliably. In addition, Rexxar's can further prolong Stukov's slow effects and vice-versa with his abilities Spirit Swoop and Unleash the Boars.

Rexxar is pretty much two heroes in one, as he is always accompanied by Misha. Because of that, both of them become easier targets for Chains of Kel'Thuzad, therefore using their greatest strength against themselves. Additionally, this aids Kel'Thuzad in completing his trait quest, Master of the Cold Dark.

Rexxar is an easy target because of Misha. Since she counts as a Hero too, Malthael can easily exploit her AI and feed on her, plus getting the bonus heal from Soul Rip; he can also quickly farm Misha to complete his quest talents.

Champion of the Horde

100
When the Crystal Citadel fell, the Frostlords were scattered and never heard from again. Legend holds that some still wander the frozen tundras or the north, ever searching for a new home.
Features themed abilities.

100
A beastmaster is at one with the wilds. When they kill, they ensure every part of the animal is made use of.

1600
The terrans are descended from Earth's exiled prisoners, mutants and degenerates. Some, like military ursine-handler Cpl. Rex Arkk, are more genetically aberrant than others.
This skin is related to the StarCraft themed-skins. Features altered voice-over and themed abilities.

Rexarr was conceived within the first two years of the game's development.[2] He was showcased as a character in 2013.[3] As of December 2014, he was still intended for inclusion, but his release date was unknown.[4] He was formally revealed at GamesCom 2015.[5] 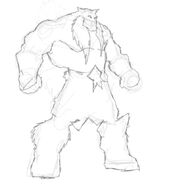