Overwatch is a team-based FPS game from Blizzard Entertainment.

It was originally stated that heroes from Overwatch might receive representation in Heroes of the Storm, though not prior to the release of Overwatch itself.[1]

A version of the Overwatch world exists within the multiverse of the Nexus. Versions of heroes from other universes are located here. 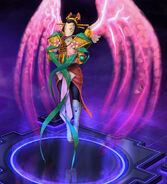 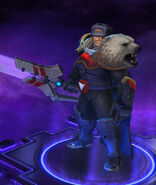 The below Collection items are specific to the Overwatch franchise as a whole.

In Overwatch, an arcade cabinet can be found in one of the maps, titled "Fighters of the Storm."[2] This is possibly a reference to Heroes itself.

In Overwatch, a poster for a movie titled, Heroes of my Storm can be seen, an overt reference to Heroes of the Storm.