View source
"Legends speak of a place where worlds collide and mighty heroes battle for dominance..." 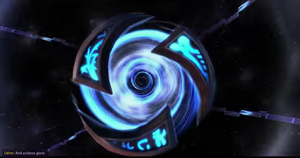 The Nexus is the setting of Heroes of the Storm.

The Nexus is a powerful[1] trans-dimensional storm, a strange limbo of clashing universes.[2] Worlds collide from across space, time, and even dimensions.[3] The storm of the Nexus can rip worlds, and even universes in and out of existence, but can also pull worlds into stability. Some of the Nexus's central realms are these "points of stability" within the storm. Each of the central realms is ruled by a realm lord. Every realm contains power in of itself, and every realm lord has taken the power of their realm through right of conquest.[4] The Nexus has existed for thousands of years, if not longer, and battles have been waged within it for that period.[5]

The Nexus operates by its own logic and set of rules;[6] for instance, at least for heroes, death is a but a "temporary setback."[3] Combatants from Azeroth, Sanctuary, and the Koprulu sector have been sucked into it, fated to do battle.[2] New heroes are constantly arriving.[1]

The Lunar Festival is celebrated by the denizens of the Nexus, introduced by those sucked in from Azeroth.

The Nexus (or at least one of its realms) is orbited by two moons.[7] It experiences seasons such as winter.[8]

Deep in the Nexus's primordial wilds, the land itself births ruinwalkers.[9]

Within the Nexus is an elite group of law officers, part of the STORM unit. It's unclear whether they are confined to a single world or if their jurisdiction extends to all worlds.

Currently, the Nexus is under threat of invasion from an external force. It is consuming the outer reaches of the Nexus, while in the inner realms, the realm lords continue to bicker, with the exception of the Raven Lord.[5]

"You know the best part about exploring the Nexus? It’s I get to see a new world every twenty minutes or so."

Numerous worlds exist within the multiverse of the Nexus,[10] which are referred to as "realms."[11] They manifest as a part of the same "planet" as the Nexus, and are accessible through foot and other methods of conventional transport. While many of these worlds are unique, some are mirrored versions of those found within Blizzard's franchises and contain alternate universe versions of various heroes.

"Nexus? So this is a protoss thing?"

The Nexus is the setting of Heroes of the Storm. The original setting of the game was a cyber world where heroes were to provide entertainment[14] for "dark and terrible gods."[15] Elements of this remain in the game's tutorial (the starmap).[3] The idea for the Nexus was to create a world that would allow integration of Blizzard's franchises.[16] The idea of a distinct world stems back to the game's mod origins.[17] 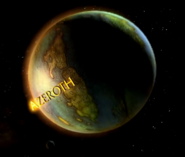 Azeroth, as seen from the Nexus

Korhal, as seen from the Nexus

Sanctuary, as seen from the Nexus