Heroes of the Storm Wiki
Register
Don't have an account?
Sign In
Advertisement
in: Warcraft, Heroes, Murloc,
and 4 more

Murky is a Melee Specialist Hero from the Warcraft universe, based off the pet of the same name. Murky is very, very weak, but incredibly persistent.[1]

The origins and history of the murloc race are shrouded in mystery. A large part of this is because their lore is passed down their own oral tradition, which is almost incomprehensible to most other sentient races, but also because murlocs generally have very little tolerance for other races. Murlocs often congregate in heavily populated coastal settlements, and are more than willing to assist each other when threatened. While many have debated on their intelligence, there is reason to believe that their use of weaponry and uncanny fighting abilities may actually imply that they possess a rather sinister racial intellect.

Like the enigmatic origins of the murloc race, Murky’s past is also veiled in a variety unanswered questions. Who is he? Where does he come from? He dies again and again, and yet each time, returns to life from his egg. Stranger yet, when he emerges, he looks and sounds precisely the same. Does he possess unspeakable powers? Could he be immortal?

The world may never know.[2]

Murky is a Specialist who is capable of wearing down opponents by repeatedly respawning from his hidden eggs a few second after being killed.[2]

Becomes Invulnerable for 2 seconds. While active, you cannot attack or use abilities.

Place an Egg at target location, revealing the nearby area. Upon dying, you respawn at the Egg after 8 seconds. If your egg is killed, you are revealed to enemies for 15 seconds. You only grant 25% of a Hero's experience upon dying.

Command a legion of Murlocs to march in a target direction, each one leaping onto the first enemy Hero or Structure they find. Each Murloc deals 25 (+4% per level) damage and slow its target by 15% for 5 seconds. Does half damage to Structures.

Summon an octopus to stun target enemy Hero for 3 seconds while you hit them for 1 damage a second.

Passive: Spawning from his Egg increases Murky's mount speed to 45% for 5 seconds.

Activate to place a fake Egg. If the fake Egg dies, it casts an untalented Slime. Maximum 3 fake Eggs.

Passive: Spawning from his Egg grants Murky Stealth for 5 seconds.

Killing a Minion with Pufferfish grants a stack of Bribe. Use 8 stacks to bribe a Mercenary, instantly defeating them. Does not work on Bosses. Maximum of 32 stacks.

Every 15 seconds Murky is alive he gains 5% more Ability Power, to a maximum of 15% extra. These stacks are lost on death.

Gain 50% Movement Speed and move through units while in Safety Bubble. Reduce the cooldown of Safety Bubble by 2 seconds.

Basic Attacks against Heroes deal an additional 7.28 (+4% per level) damage a second and slow the target by 7% for 4 seconds. This effect can stack up to 5 times.

Command a legion of Murlocs to march in a target direction, each one leaping onto the first enemy Hero or Structure they find. Each Murloc deals 25 (+4% per level) damage and slow its target by 15% for 5 seconds. Does half damage to Structures.

Summon an octopus to stun target enemy Hero for 3 seconds while you hit them for 1 damage a second.

Safety Bubble restores 40% of your Health.

Spawning from his Egg grants Murky a Shield equal to 100% of his maximum Health. The shield lasts indefinitely.

Every 3rd consecutive Basic Attack against an enemy Hero causes a free Slime to be cast upon them.

The Pufferfish casts Slime at its location upon landing.

Heroes hit by Pufferfish take additional damage equal to 15% of their maximum Health over 5 seconds.

March of the Murlocs can be channeled, sending little Murlocs indefinitely

Decreases the cooldown of Slime from 4 seconds to 2 seconds.

Just like Muradin and Malfurion, Murky’s biggest asset when playing with Chromie is the incredible lockdown potential in Octo-grab. Unlike these other two Heroes, though, Murky also brings a devastating amount of damage that combos with Chromies perfectly. Together these two are tiny terrors on the battlefield!

100
Do you live on land? Would you be more comfortable in water? Well now, with Murky's new conch-filtration device, you can stay wet, AND smell like crustaceans! Win win!

400
Alright, fess up... Who put the murloc in that power armor? Sammy? We talked about this...Guys, this is real cute and all, but how the heck are we supposed to get him out of there?
This skin is related to the StarCraft themed-skins. Features altered voice-over and themed.

400
Noblegarden is an important time of the year for the inhabitants of Bunny Island. Even murlocs celebrate the festivities, hiding their eggs in the most inconvenient spots possible.
This skin is related to the Noblegarden themed-skins. Features themed abilities.

400
Johanna's apprentice might be small, be he doesn't take any carp.
This skin is related to the Diablo themed-skins.

150 (Hallow's End event)
For his first Hallow's End costume, Murky wanted to dress up as the scariest thing he could think of. So, he chose to be a garden shambler. Wouldn't you? 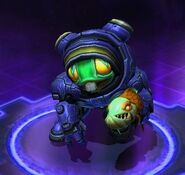 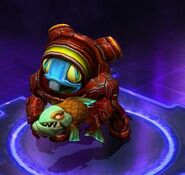 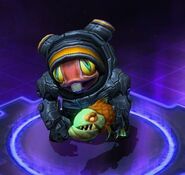