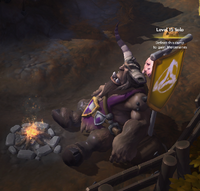 Each mercenary camp has a flag above it denoting the level required to either solo the camp or attack it with a group. Mercenary camps spawn 60 seconds after the game begins.

It is recommended that mercenaries are supported by heroes.[1]