Heroes of the Storm Wiki
Register
Don't have an account?
Sign In
Advertisement
in: Diablo, Heroes, Demon,
and 10 more

This is from the Diablo universe.

Mephisto is a Ranged Assassin from the Diablo universe. He is a highly aggressive Mage who deals incredible sustained damage by reducing the cooldowns of his abilities when damaging enemies.

Dul’Mephistos, the Lord of Hatred, is said to the be most cunning among his brethren. Even while imprisoned in a soulstone, his vile influence corrupted the Zakarum and manipulated them into breaking the seal, giving him free reign to reunite the Prime Evils and enslave humanity.

Mephisto is Lord and Aspect of Hatred and one of three Prime Evils, alongside his brothers Baal and Diablo. Like all the Great Evils, Mephisto was born from one of the seven heads of the Great Dragon Tathamet.

He is the eldest of three Prime Evils, and is known for being cunning and manipulative, pulling the strings behind many of the major events that unfolded during his rule over the Burning Hells, while commanding armies against the High Heavens.

Mephisto's daughter, Lilith, was responsible for the creation of the world of men, Sanctuary, alongside her lover, Inarius, as a way to escape from the Eternal Conflict that forever plagued their existence. Once Mephisto and his brothers learned of it, they made their efforts to slowly infiltrate Sanctuary and conquer it for the Burning Hells. Mephisto created the Triune, a religious order to hide their power from the High Heavens, as well to corrupt the mind of the men from afar.

Directly under the Prime Evils in power are the Lesser Evils - Andariel, Duriel, Belial and Azmodan. The four Lesser Evils rose up against the Primes, and despite the efforts of Mephisto and his brothers, they were cast out of Hell into the mortal realm of Sanctuary. As the Three appeared on Sanctuary they were very weak and roamed the world for forty years, spreading terror, destruction and hatred wherever they went. Eventually however the Horadrim, a united order of mages, was created by Tyrael to hunt down and imprison the Prime Evils. Mephisto was the first to be captured and then taken to the city of Kurast, where the Zakarum church was entrusted with guarding him.

Mephisto does not stay silent for long. He immediately begins to try and corrupt the priesthood and its archbishops. Mephisto continued to strengthen his hold over Kurast, and by the time Diablo and Baal arrived to meet him little except for fanatical Zakarum zealots remained. Together the Three opened a portal to Hell through which Diablo stepped through to once again secure their hold over the Burning Hells. Mephisto remained in Kurast, but was killed shortly thereafter by the heroes pursuing Diablo. The heroes then took his soulstone with them to Hell, where they smashed it at the Hellforge.

Mephisto a slippery Assassin with a hit-and-run gameplay style, capable of dealing high amounts of sustained damage in organized teams that can pin down opponents in crowd control chains. He is notable as his trait, Lord of Hatred, causes his Basic Abilities to reduce the cooldown of all his Basic Abilities, essentially allowing him to get resets as long he hits enemy Heroes.

Overall, he fits into most team compositions thanks to his flexibility and talent diversity.

Conjure a skull that travels in the target direction after 0.75 seconds, dealing 127 damage to enemies hit and Slowing Heroes hit by 25% for 2 seconds.

A ring of lightning appears around Mephisto for 2.5 seconds. Enemies within the ring take 48 damage every 0.25 seconds. Each time a cast of Lightning Nova hits a Hero, its damage is increased by 4%, up to 40%.

Teleport to a location, dealing 78 damage to nearby enemies and leaving behind a Shade of Mephisto at Mephisto's original location. After 2.5 seconds, Mephisto is teleported back to the Shade's location.

After 1 second, unleash a wave of evil spirits that Root the first enemy Hero hit for 2 seconds and deal 160 damage to them over the same duration. Durance of Hate spreads outwards from its initial target, Rooting and damaging additional nearby enemy Heroes.

Every 5th hit from Lightning Nova against the same target deals 90 bonus damage.

Shade of Mephisto grants 20% Spell Power while active and for 2.5 seconds after ending.

Skull Missile heals Mephisto for 50% of the damage it deals to Heroes.

At the end of its duration, Lightning Nova grants Mephisto a Shield equal to 50% of the damage it dealt to Heroes. Lasts 7 seconds.

Enemies near Shade of Mephisto are Slowed by 40% for 2 seconds.

Shade of Mephisto grants 20 Armor while active and for 2.5 seconds after it ends.

After Shade of Mephisto expires, all Slows and Roots are removed from Mephisto and he gains 20% Movement Speed for 3 seconds.

After 1 second, unleash a wave of evil spirits that Root the first enemy Hero hit for 2 seconds and deal 160 damage to them over the same duration. Durance of Hate spreads outwards from its initial target, Rooting and damaging additional nearby enemy Heroes.

Skull Missile explodes on contact with Lightning Nova, dealing 144 damage to nearby enemies.

When Lightning Nova's damage bonus reaches 40%, enemy Heroes within its radius take damage equal to 12% of their maximum Health.

Activate to extend the duration of Lightning Nova by 2.5 seconds.

Durance of Hate Silences enemies for 2 seconds after its Root expires.

Activate to swap locations with Shade of Mephisto and refresh its duration.

Passive: Shade of Mephisto benefits from all of Mephisto's level 7 Talents.

Lord of Hatred (base)

Star Wraith
The Eternal Empire is built upon conquest and servitude, but not all planets submit easily. Upon the Star Lord's command, the legion of Star Wraiths descend upon rebellious worlds leaving only scarred husks in their wake. 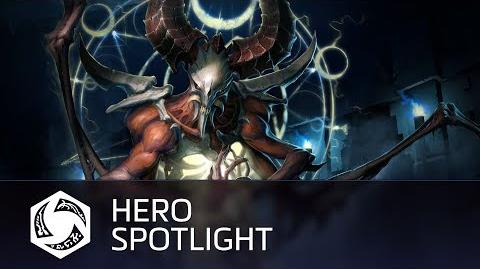