Heroes of the Storm Wiki
Register
Don't have an account?
Sign In
Advertisement
in: StarCraft, Removed, Heroes,
and 4 more

This has been removed from Heroes of the Storm. 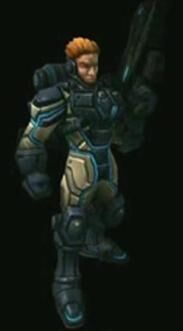 Leon appeared in early builds of Heroes of the Storm The elite sniped of the Dominion's famous "Squad 17" wet-works unit, Leon has killed hundreds who have never heard the rifle shot that ended their lives. He is lethal, deadly, and completely loyal to the Dominion.[1]

Leon appeared in the 2010 build of Blizzard DotA. At this point, he was known simply as "Ghost."[2] Leon had long range attacks and could cloak. He benefited from dexterity-boosting items. He had the following stats and abilities: