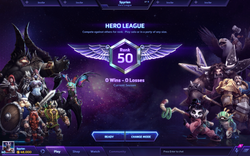 Hero League is a game mode that allows players to compete in ranked matches against other players of similar skill. It can be found using the Ranked page on the Play screen.

Players will see their current rank, win/loss record, and a few notable stats displayed on the Hero League Play Screen. From here, click “Ready” at the bottom of the screen to jump into the Hero League queue alone, or in a maximum party size of two players.

The matchmaker will search the Hero League queue in order to place players with and against players of similar skill, and will also use a matchmaking rating (MMR) that’s separate from Quick Match rating. This is an individual rating, meaning that it is unique to each player's own performance, and will not change based on different parties or players they buddy up with. Everyone will start their Hero League journey with a blank slate in terms of MMR, which may initially cause Hero League matchmaking to feel a little wild while the matchmaker learns more about each player’s individual skill level. The more Hero League games are played, the more accurate matchmaking will become.

Hero League begins with a series of 10 placement matches, to determine initial rank. During these matches, a player may encounter a large range of allies and opponents. After these are complete, the player will be placed at a rank deemed to be appropriate for their skill level.

Wins award points, losing also results in points being lost. In a game where the matchmaker pits you against an evenly matched opponent, the player gains or loses around 200 points. Winning against a more skilled opponent will gain more points, but losing to one penalizes you less. Winning against a less skilled opponent will earn fewer points, and losing to one penalizes you more. There are occasional bonus points for skill bonus.

Each rank is represented as 2% of the overall population of Hero League, with 50 being the least skilled and 1 being the most. Ranking up or losing a rank will place you at first near the middle of ranking up or down again, usually taking two to three consecutive wins or losses to do either. The exceptions are that you cannot fall below rank 40 due to losses, and once reaching rank 1 you acquire points still, which means that a few losses will not always de-rank you to 2. [Needs Editing]

All players must play 10 placement matches in order to receive an initial ranking.

As part of the June 2016 Ranked Play revamp, Hero League will receive the following rewards. 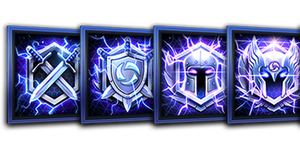