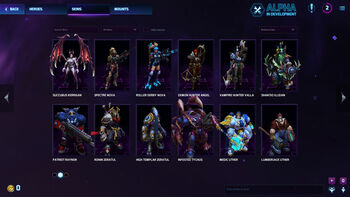 Each hero has four classification attributes - Damage, Utility, Survivability (health and/or self-sustain), and Complexity - and fit one of four roles:

Heroes level up as a team rather than individually.[5] Customizable skins can be unlocked for heroes through loot boxes or purchasing with Shards / Gems.[6] Hero colors and skins can be changed during selection.[7]

Heroes engage in banter with each other that reflect their backstories.[8] The majority of heroes are slightly altered from their host universe in terms of appearance, so they can be recognized as being of Heroes of the Storm in aesthetic, if not necessarily in origin.[9]

When it comes to choosing heroes for inclusion, Blizzard uses the following processes and sources:

For hero retrieval, Blizzard uses three teams—art, lore (cinematics), and gameplay. The three teams come together when deciding what the roster will be.[10] Lore and fantasy are the main factors for choosing a hero. If the hero was playable in a former game, their abilities are usually based on their abilities in said game. Abilities are cut down if there are too many.[11] It is harder to port heroes from older games than newer ones due to the simpler art assets used.

In some cases, a hero is chosen simply for being iconic in its host setting.[12]

There is no set ratio for heroes in regards to which universe they come from. There is, and will be, more heroes from the Warcraft setting than other Blizzard settings due to the size of the Warcraft universe. However, the developers intend to try to split the hero roster along Blizzard's major universes.[10] Blizzard intends to release a new hero every 3-4 weeks.[13] There is no cap on the amount of heroes the game will feature.[14] The process is refined enough that Blizzard can plan up to eight months ahead to stagger its release cycle.[12]

Heroes may be controlled by artificial intelligence instead of players. In this case, AI's will follow a players pings, such as honing in on objectives or following a player's hero. If a player leaves the game, their hero is taken control of by an "elite AI." Currently this corresponds to higher difficulties. Through development it is intended that these AIs match the player's MMR at the time of their departure, and can perform actions such as skill shots.[17]

Initially, when a player first played the game, they would only have a few heroes available to them at first. As one played matches, more heroes would be unlocked. When an individual had earned all of the heroes, they could begin unlocking cosmetic “prestige” items by winning games with specific heroes. Prestige items would include alternate weapons, crowns, and other accessories.[18]

In 2014, creating a hero took about 1-2 months. 2-3 weeks were spent on character modelling and texturing. Afterwards, the model was animated over the period of about a week, though this could vary depending on the model's complexity. Around this time the hero would be handed off to the effects team, who would create artwork for the hero's abilities. The amount of time this took varied (e.g. a hero who utilizes summons would require more work). Over time various art reviews would occur. Once the hero neared completion, skins could start to be applied.[19] As of 2018, the average hero development time is 6-9 months.[20]

During early development, heroes would be buffed if fellow heroes were in the same game with them that were related in lore (e.g. two terran heroes from StarCraft would buff each other per their shared origin and species). The game quickly "warped" in testing around these interactions, and the buffs were dropped.[21]

After downloading the September 13, 2016 patch and logging into Heroes of the Storm, all players were able to add a new Hero to their collections for free:

Players who purchase a physical copy of the Warcraft movie will receive Gul'dan for free.