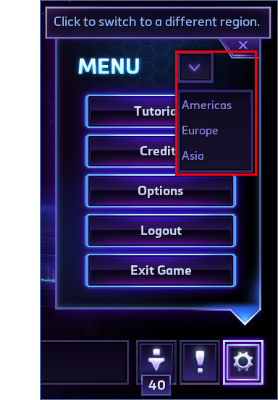 Battle.net Global Play allows you to connect to game servers in regions outside your own, making it easy to play with your friends in other parts of the world.

When a region’s game servers are undergoing maintenance, you may use the Global Play feature to log in to a different region that is not down for maintenance. However, when doing this on patch days, it’s very important to keep in mind that different regions may be running different versions of the game -- which can lead to some confusion.

The time your Heroes client patches is determined by the region currently selected in the dropdown menu found above the blue Play button in your Battle.net App. Once your client downloads and installs the new patch, you will be locked out of any other regions that have not yet received that patch.

For example, let’s imagine that the Americas region of Battle.net has received a new Heroes patch, and you're a European player who swaps regions to the Americas. Your Heroes client will then be updated according to the Americas' schedule. Since you've patched with the Americas’ game servers, and the Europe region has not been updated yet, you will be locked out from playing in Europe until the European servers undergo maintenance and patch as well. This applies to all regions.

As mentioned above, please keep in mind that when playing on another region, your friends list, account and hero progress, as well as any purchases you’ve made using real money or gold (including Heroes, Skins, Mounts, Bundles, and Stimpacks), will not carry over from your home region. Rest assured that all of your account information, purchases, and friends will still be waiting for you upon switching back to your home region.

What’s more, if you decide to make a real-money purchase while playing Heroes in regions other than your own, the experience should work just like it does on your home region. This means that you will use the same payment information, pay the same prices, and spend the same currency as you do when buying items in your home region. Once again, however, it’s important to remember that any items bought while using Global Play will be tied to the region in which you made the purchase.[1]