View source
"When night falls, horror sprouts in the Garden of Terror. Kill the terrors, collect their evil seeds, and let your green thumb bring victory!"

Garden of Terror is a three-lane battleground. When night falls, the shamblers will come out in the garden area of the battleground. Normal mercenary camps only disappear when a team spawns a Garden Terror.

Once the royal gardens were a splendor to behold. But lately a shadow has fallen over them...Writhing tendrils creep across the grounds at night, and a number of servants have disappeared while walking its twisting paths. Queen Nightshade claims to be unaware of these incidents, but some are beginning to suspect she has gone mad.[1]

The map has a day/night sequence. During the night players will want to gather seeds, 100 of which will allow them to summon a Garden Terror in their main space on a patch of fertile soil. The hero who moves onto the patch will become the Garden Terror (in a manner similar to the Dragon Knight of Dragon Shire). This is a timed summon.

At night, players will want to kill shamblers that spawn all over the map, indicated by purple marks. During night, visibility is reduced. The night sequence will not end until all the shamblers are killed.[2] Night persists until all the horrors (which drop seeds) have been killed.[3]

Heroes that may function the best in the Garden of Terror: 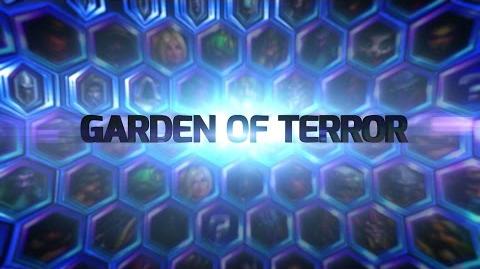