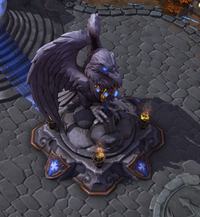 The Core (a.k.a. Palace)[1] is the ultimate objective on each map. There is one for each team, and to win the match the opposing team's core must be destroyed.

Each core is located in its own area at the start point for each team. It typically has a high number of hit points and also spawns minions. Cores fire on enemies, dealing splash damage. Their health scales throughout the game.[2] Cores also have a shield that equals to 50% of the core's maximum health. If damaged, those shields will regenerate at 100 per second if the core does not take any damage after 8 seconds; therefore, if the shields are completely depleted, it will take 70 seconds for them to fully regenerate. The top of the screen displays both health (in percentage) and shields for both teams throughout the match.

Some specific maps, namely Towers of Doom and Hanamura, have different stats than the usual. In both the aforementioned maps, the cores have greatly reduced health and cannot be damaged by conventional means (having the permanent "Protected" status) except for the respective map mechanics (capturing towers and escorting payloads). 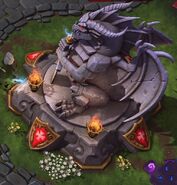